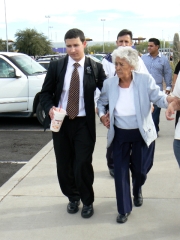 Jared Leon volunteered for Casa De Los Ninos for 4 years while he was in high school. At Casa De Los Ninos he was a friend, to some, they saw him as a brother, & others, they even saw him as a dad. He would volunteer twice a week. His mother would volunteer with him when her work schedule could permit. When asked why he would volunteer & dedicate his time & efforts, while he could be spending his time elsewhere. He would respond, “There is a lot that goes on in our community that we are either unaware of, or do not take the time to appreciate or marvel. By volunteering I am able to give back to my community. I am able to make a difference in the lives of those I touch. I know that most kids will not remember my name, or what I said to them, or the affection I gave to them. What I do know, is that in a time when they needed someone most, I was there. I was able to be their knight in shining armour. I stood proxy for their parent that was suppose to love them, I stood proxy for the love they were suppose to be given. I stood proxy. That’s what volunteering means to me. It means that you stay proxy for something bigger than what you envision.”

Jared’s efforts did not go unnoticed. It did not take long for the staff that worked there to see a change going on at Casa De Los Ninos. Jared started something called called “Circle Hands.” Each Friday he would gather all of the kids around lunch-time & have them hold hands, & spin in a circle. Each child would say what he or she was grateful for. The children loved Circle Hands, & would all join in. Apparently, it all began when Jared saw a brother & sister crying on a bench. Jared went to comfort them, & had them hold hands & asked them to spin in a circle. He then began saying what he was thankful for, & asked them to join in. The tears that stained those precious cheeks were replaced by mirth & laughter. Jared was able to take a situation that most teenagers would see as unsettling, to be one of opportunity.

Jared is no 23 years old, and continues to serve his community in Tucson, Arizona as a volunteer for Casa De Los Ninos. His actions do not go unnoticed. The smiles, laughter, & peace which he brings to the children is heartfelt & sincere.

Most teenagers spend their time on the weekend out with friends or at sporting events. It is reassuring to know that there are those who devote their time & efforts to those less fortunate. As Jared would say, “You cannot begin to appreciate all that you have, until you truly know what it means to have nothing. Seeing children who are helpless & without homes, family members, etc. It makes you really think about how good you really have it…”